At this week’s WINIR conference on Institutions and Open Societies at Utrecht University, Nicolas Hofer, Wolfgang Theil and Thomas Weiss will present some more material we developed over the past year.

Nicolas will summarize some difficulties in building open societies that are are rooted in the contradictory basic legal structure of open societies:  the private/public law dialectic.  Public law is based upon centralizing power and sovereignty, private law on its opposite, fundamentally decentralizing power, decisionmaking and sovereignty.  Yet, private law presupposes public law and cannot exist without it.  Republican constitutions mediate this conflict but in times of crisis have often been replaced by authoritharian forms of government: forms of government have been changing back and forth between more centralized and more decentralized forms.  Such cycles were well known to many republican thinkers of classical antiquity, among them Aristoteles, Cicero, Machiavelli, Vico and Kant, as Anacyclosis.

State building itself has to deal with an even more fundamental conflict, as Francis Fukuyama points out in his recent 2 volume global comparative history of state formation: the conflict between kinship-based “informal” relations and the impersonal legal order of a modern state, which are in no less of a tension than public and private law.

Wolfgangs presentation will develop a legal institutionalist concept of money and show how from that perspective, two controversies in monetary theory can be solved in a fairly uncontroversial way:  that between metallists and nominalists, and that between Randall Wray’s Modern Monetary Theory and Perry Mehrling’s Money View whether the state’s liabilities are often at the top of the hierarchy of means of payment because the state is a quasi-absolutist entity (Wray), or rather because the state “does business” with all its citizens (Mehrling).

Thomas’ Presentation will sketch basic elements of Stützel’s balance mechanics-based theory of business cycles, thereby moving from Levels 1 and 2 of our framework to laying out some basic concepts for levels 3 (intentional actors and their plans & expectations) and 5 (long cycles) of our model building project: 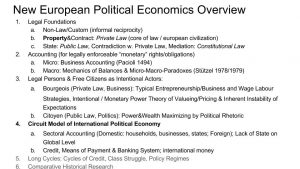 Presentations & Papers will be available soon. For now, you can check Wolfgang’s academia page for papers, and our youtube channel for previous presentations.